In February 2021, a series of three severe winter storms pounded Texas, causing a massive power grid failure that killed hundreds of people and caused an estimated $195 billion in damage.

The disaster “focused people’s attention” on power, says Jana Sebestik, the Assistant Director of STEM Curriculum Design in UIUC’s Office for Mathematics, Science, and Technology Education (MSTE). “It was in the news a lot, and people were starting to think, ‘well, there must be something that makes all this happen; [power] doesn’t just magically appear at the wall switch’.” 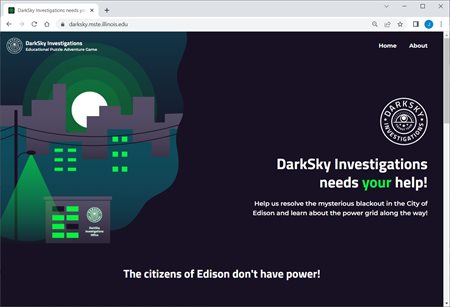 The tragedy underlined the significance of a project Sebestik was already working on: the development of DarkSky Investigations, an online game that challenges players to investigate the cause of a fictional city’s cascading blackout while learning about the city’s power grid. The game is now available, for free, at https://darksky.mste.illinois.edu/.

DarkSky Investigations uses a series of websites, modeled after real-life energy distributor websites, to provide an immersive environment in which players explore and analyze electricity data and cybersecurity measures within an energy delivery system. Players solve puzzles and unlock clues to learn about the complexities of electricity infrastructure, circuitry, encryption, and system resilience. After they discover the blackout’s cause, they’re asked to help the city by recommending ways to make its energy delivery system more resilient.

DarkSky Investigations was created as part of the education and outreach efforts of ITI’s Cyber Resilient Energy Delivery Consortium (CREDC). Like many other campus initiatives with a prominent education or outreach component, CREDC partnered with MSTE on its engagement activities.

MSTE provides a broad array of support for developing and delivering STEM outreach resources, drawing on its extensive experience in curriculum development and its long-term relationships with local schools, community organizations, and teachers’ organizations.

Sebestik says her CREDC education group has always tried to “think about how we can articulate what we would like policymakers to think about. Or at least the general public that might... support policymakers.”

Texas had been warned back in 2011, after a less serious incident, that they needed to weatherize their grid—but the people who mattered didn’t appreciate the danger, and the recommendations were disregarded. Arguably, it was a worst-case example of what can happen when a technology isn’t widely understood outside the small circle of specialists who work with it.

Today’s decision-makers aren’t the primary target audience for DarkSky Investigations. Rather, it was designed with middle-school students in mind, for multiple reasons. First of all, teaching kids turns them into better-informed adults; but it’s also a way of reaching their whole families, as kids often share knowledge with their parents and other relatives. In addition, middle-school age is when children typically start to reject or lean towards possible career paths, making it the ideal time to draw their attention to societally important fields, such as power engineering.

“No one ever enters a field they’ve never heard of,” Sebestik points out. “If we can introduce kids to things at school, or after school, or [at] informal education events, it’s always good.”

It’s expected that adults will also enjoy DarkSky Investigations, which can be played either individually or in groups and is suitable either as a classroom exercise or for fun.

The near-final beta version was released just days ago, so it’s too soon to say how much interest it will attract. However, it’s possible that a silver lining of the Texas disaster will be increased public interest in being informed about power systems.

“People still are worried about that Texas blackout,” says Sebestik.