Faced with persistent labor shortages, the American agriculture industry is turning to AI-driven technology to enhance farming operations and continue feeding an ever-increasing world population. Farmers have used drones for nearly a decade to image and monitor crop growth and even deliver herbicides, fertilizer, or water to the field.

More recently, a new class of AI-trained agriculture robots are being deployed to analyze crop health and soil conditions beneath the crop canopy, as well as identify and pull weeds.

However, in order for these land-based agriculture robots (agbots) to be implemented widely, their software interfaces need to be easier for farmers to use, according to CSL’s Katherine Driggs-Campbell, an expert on human-robot interaction.

“Before agbots can be ubiquitously used at scale for cost-sensitive production systems like corn and soybean, they need to be made more user-friendly to growers who are managing large acreage with little time to spare,” Driggs-Campbell, electrical and computer engineering (ECE) assistant professor, said.

Driggs-Campbell is leading a team of Grainger Engineering researchers at the University of Illinois Urbana-Champaign who recently received a $1 million grant from the U.S. Department of Agriculture's (USDA's) National Institute of Food and Agriculture (NIFA) to develop software tools to make programming fleets of agbots easier while providing tools for runtime monitoring. The team is also developing the interaction modules to make the agbots more intuitive to use by addressing human behavior modeling and planning.

“A big goal is to enable the robots to alleviate some of that labor pressure,” said Driggs-Campbell, the principal investigator of the grant. “We are identifying the different stakeholders like farmers, who have to decide if they want to purchase the system, and software engineers, who have to program the robots. We are developing the tools and mechanisms required for smooth interaction between the robots and the people that engage with them.”

At the end of the four-year project, the team will test its robots in the Illinois Autonomous Farm testbed, advancing the science and practice of coordinated agricultural robotics. A major component of this testbed are agbots designed and built by CSL/computer science Associate Professor Girish Chowdhary, the creator of TerraSentia, a compact and teachable robot that uses a number of sensors to collect data on crop health, as well as machine learning-based analytics to convert this data into actionable insights for farmers.

Driggs-Campbell and Chowdhary are working on ways to increase the robots’ level of autonomy when they’re in the field. Specifically, they’ll identify the mechanisms required for one person to operate an entire fleet of agbots in the field.

Driggs-Campbell anticipates that the software tools they develop will initially be of most interest to seed manufacturers, who want to track how crops are growing. Currently, she said, crop scouting is performed by a person who takes measurements in an area of a field rather than examining each row of crops. 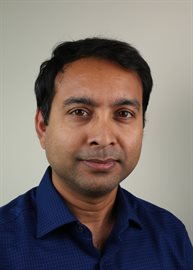 on developing software languages that will make deploying and debugging the agbots easier. They will also create monitoring tools so once the agbots are deployed in the field they will operate the way they are supposed to with minimal supervision from workers.

CSL/ECE Research Assistant Professor Roy Dong is exploring the economic incentives of potential consumers, so those incentives can be incorporated into the algorithm design and development.

The USDA NIFA grant is part of the National Robotics Initiative 2.0, which supports fundamental U.S. research to accelerate the development and use of collaborative robots (co-robots) that work beside or cooperatively with people. The full title of the Illinois team’s grant is "Increasing the level of autonomy for agricultural robots through effective interaction and programming paradigms."