Making AI robust and bringing it to the edge

Enhancing so-called edge devices, such as cell phones, smart watches, and other IoT devices, with artificial intelligence (AI) capabilities is a major goal for researchers in both industry and academia. These devices generate huge volumes of sensory data from their built-in sensors in the form of cameras, microphones, gyroscopes, and other technology. Processing all this data is challenging due to the limited computational resources and constrained energy supply of edge devices. A team led by ITI's Naresh Shanbhag is working to improve the energy efficiency and functionality of these devices.

“These data-generating devices can be made a lot smarter if they could be AI-enabled,” said CSL faculty member Naresh Shanbhag. “The 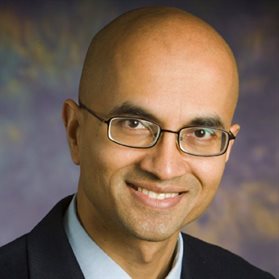 mainstream method of using AI today is via deep neural networks (DNNs). These networks are computationally complex and therefore currently implemented in the cloud. Bringing DNNs into devices such as cell phones is extremely challenging due to the need to operate on a tight energy budget with severely limited storage and computational capacity.”

Energy efficiency is just one of the problems in implementing current DNNs on edge devices. While DNNs can be accurate, they are extremely fragile and are easily fooled by an intelligent adversary. For example, even if the network answers correctly 99% of the time, it can be fooled 100% of the time with minor tweaks to data. This would be problematic in situations where an incorrect answer could cause a major safety issue, such as when the technology is deployed in autonomous vehicles or running a smartphone’s GPS system.

“Researchers want to know why DNNs behave this way. There are many speculations but no satisfactory explanation,” said Shanbhag, the Jack Kilby professor of electrical and computer engineering. “There are no guarantees with DNNs, which is alarming since they have become the building blocks of AI today and are being deployed in diverse sectors including health care, transportation, commerce, and many others.”

DNNs can introduce a whole host of problems. If a network uses a lot of energy, that means a cell phone battery would drain quickly. An inaccurate network could give an improper location or demand. Additionally, if a network isn’t robust, it could be easily tricked by a malicious adversary. The need for a network that is simultaneously energy efficient, accurate, and adversarially robust is crucially important for society to trust this technology.

This is the main focus of Shanbhag’s most recent project, “Energy Efficient Adversarially Robust Deep Nets for Edge Platforms,” funded by the Semiconductor Research Corporation. In this project, Shanbhag and his students aim to improve the inherent trade-off between accuracy, robustness and energy efficiency of DNNs.

Shanbhag’s group is exploring solutions to this problem by first figuring out why networks get compromised when energy efficiency and accuracy is increased. After figuring out the “why,” the group hopes to develop practical, energy efficient DNNs architectures and circuits and eventually would like to build lab prototypes.

Shanbhag is also affiliated with the Information Trust Institute.